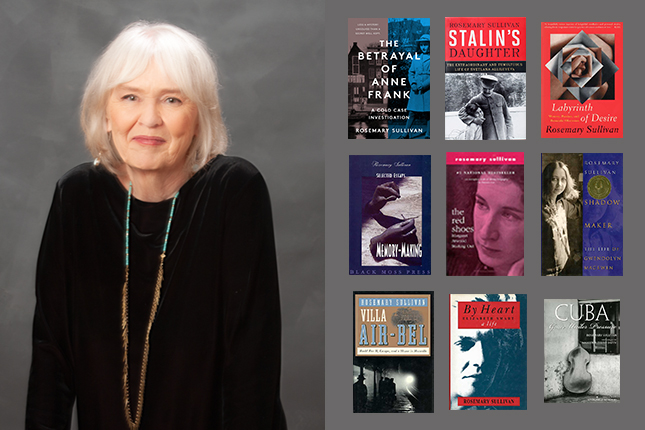 ONLINE: 2022 Hugh MacLennan Lecture
"The Betrayal of Anne Frank" and Beyond: The Work and Process of Rosemary Sullivan

The Friends of the McGill Library in partnership with Blue Metropolis International Literary Festival are delighted to welcome Rosemary Sullivan as the 2022 Hugh MacLennan Lecture speaker.
Rosemary Sullivan is author of fifteen books in the genres of biography, memoir, poetry, travelogue, and short fiction, including Shadow Maker: The Life of Gwendolyn MacEwen, which won a Governor General's Award; The Red Shoes: Margaret Atwood Starting Out; Labyrinth of Desire: Women, Passion and Romantic Obsession; Villa Air-Bel: World War II, Escape and a House in Marseille; and Stalin's Daughter, which won the Hilary Weston Writers' Trust Prize, the BC National Non-Fiction Award, and the RBC Charles Taylor Prize, as well as the International Plutarch Award in Biography.
Her most recent title, The Betrayal of Anne Frank: A Cold Case Investigation, has been sold in twenty countries. In 2012, Rosemary Sullivan was named an Officer of the Order of Canada for her contributions to Canadian culture.
The evening will feature a virtual conversation between Rosemary Sullivan and Anne Lagacť Dowson, Montreal-based freelance journalist and commentator. The discussion will address Rosemary Sullivan's oeuvre, themes, and process.
Works by Rosemary Sullivan will be available for purchase at Paragraphe Books.
The MacLennan Lecture is generously supported by Donald Walcot.

YouTube link: https://youtu.be/Di_v-DbNcrU
Audience questions can be emailed in advance or during the event to info.library@mcgill.ca.
ONLINE: 2022 Hugh MacLennan Lecture
"The Betrayal of Anne Frank" and Beyond: The Work and Process of Rosemary Sullivan

View our Event Cancellation and Refund Policy.
Back to Events
×